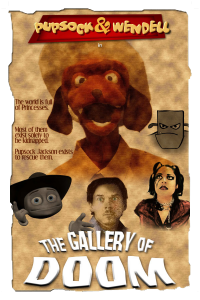 Princess Stacie (Joey Monasterios) has been kidnapped by the curator of an old art gallery. Her only hope is a puppet dog named Pupsock Jackson, and his animated sidekick, Wendell. Just when the Professional Princess Rescuers think they have the case all wrapped up, they find the haunted museum has a few surprises waiting…

PUPSOCK & WENDELL IN THE GALLERY OF DOOM was filmed in January of 2007 in Orlando, Florida and is the second collaboration between Blue Juice Films and Poem Pictures. The film uses a unique blend of 3D-animation, 2D-animation, puppets and live action to tell its innovative story. To learn more visit www.poemfilms.com.