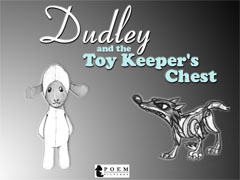 This 14-minute storybook fantasy tells the story of Dudley the lamb, the only toy ever created by the world’s finest toy mender. Dudley’s nemesis, the evil wooden wolf Silas, has been terrorizing the store where they live. When Silas turns his menacing teeth toward Dudley ‘s creator, the little lamb must defend his home.