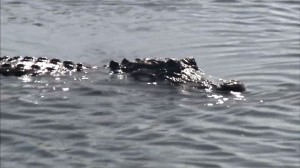 In this pilot episode, Pat Martin and Frank Scibelli were brought to Central Florida and set up at a rural location where they had access to all the equipment and supplies needed to help them in their quest to find the finest wild ingredients.

With competition starting at 5 p.m. and with only 24 hours to compete, they will spend the next day and night exploring thousands of acres of Florida backcountry, crabbing and fishing on Merritt Island, discovering abandoned citrus and mango groves, and diving in the Indian River Lagoon and Atlantic Ocean.

Before the 24 hours are up, the chefs will prepare an appetizer, entrée, and dessert for the three judges.  Final scores will be tallied and the Adventure Chefs winner will be chosen.

Frank Scibelli is a successful restauranteur from Charlotte, N.C., and celebrity chef for the National Dairy Association and the National Pork Board. His catering company, Plate Perfect, has hosted Presidential gatherings, private NASCAR events and professional sporting teams. His restaurants, Mama Ricotta’s, Cantina 1511, and Big Daddy’s Burger Bar, are well-known far outside their North Carolina locations. In December 2008, Charlotte Magazine named Frank “Restauranteur of the Year.” Frank brings his fine kitchen skills and incredible food preparation knowledge to this competition.

Pat Martin is from Hobe Sound, FL. He is a well-known comic-book writer and raconteur who was recently featured cooking unusual foods in the “Students of the Unusual” comic magazine. This lifetime outdoorsman brings his wealth of skills to the competition as well as his willingness to experiment with food and his renowned lack of culinary fear.

It’s the woodsman versus the restauranteur in the first, action packed episode of Adventure Chefs!

From left to right,