The Accelerators is a high-speed adventure story that imagines a future ruined by time travel.

BERTRAM and ALEXA are the last surviving members of a forgotten 1960s research project. Each of them is armed with a time machine; Bertram uses his to chase Alexa through the decades, trying to destroy any trace of their research, while Alexa uses hers in a desperate attempt to escape him. Time travel is a one way trip for them: their time machines can only move forward in time, never backward. To save herself, Alexa must leap further and further into the future, with Bertram following every time. 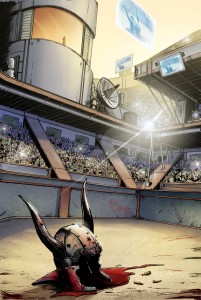 Caught up in their cat-and-mouse chase is SPATZ, a good samaritan from the 1990s who wanders into their crossfire and is dragged along with them into the future, a nightmarish dystopia where everyone has their own time machine and the world has fallen into chaos. Here, most people have fled even further into the future to escape their awful present; those who remain distract themselves with gruesome spectacles such as The Time Games, a gladiator-style death match where unwitting warriors from throughout history are pulled forward and forced to fight each other.

Spatz, a stranger in a strange land, finds himself trapped in the Time Games with no way back. As he fights to survive and escape, Spatz learns that he may be more important to the future than anyone could possibly imagine, and that in fact there may be a way home after all.